-First look at Japanese military boots and other products, most people will say it is really ugly. But the beauty on the surface is not so important as the culture behind it.

Between 1900 and 1950, world war ii spurred the arms business and military boots were introduced in large Numbers. For the infantry, not only good-looking, military boots light boots can make the infantry in the march process quickly move, high help design as always can well protect the ankle, thick soles not only grip the ground is strong and not easy to wear, military boots leather upper breathable, but also have a natural waterproof function. Practical, durable, and inexpensive, these military boots are a good value for money for an army at war. 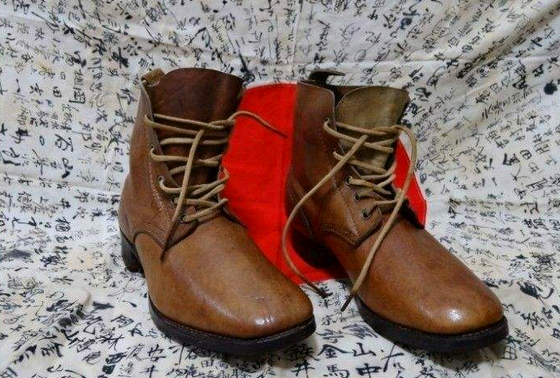 After the second world war, when the end of the war broke down the huge demand for military boots, a large amount of surplus military boots flowed into the market.

The Amekaji style was born from this. With the rapid development of postwar American economy, this style of clothing has the design concept of practical durability and aesthetics, which is rich in rich American style.  Japan, on the other hand, has a retro craze. At that time, the culture was deeply loved by the Japanese.

Amekaji is derived from the Japanese's broken English pronunciation —American causal. Since its defeat, Japan has received post-war assistance from the United States, and its economy has developed rapidly, rapidly becoming the second largest economic power in the world. The influx of American culture permeated almost every aspect of Japanese life, from Hollywood movies, Zippo lighters, skateboarding and hip-hop to the later Harley motorcycle culture, rock culture.

The Japanese also love the shoes, which at first glance have an ugly taste, and play with them as one of the indispensable items in Amekaji. To discover the charm of ugliness, the Japanese have to say they have a knack for it.

Amekaji is a set of Japanese culture restoring ancient ways, focusing on practical functions rather than beauty. Under the influence of American retro culture, Japanese people integrated their unique Amekaji style and formed the Japanese Amekaji style instead of simply imitating it.

Military boots, as a product of wartime promotion, were also controlled by the Japanese. On the basis of not losing the original culture, I integrated my unique Amekaji style and finally created my own things.

This kind of military Boots is widely used in modern times, or in the second world war, when the Czechoslovak army took a liking to it, and the Japanese Monkey Boots introduced as a special military Boots for infantry, you can not see now you feel ugly, at that time Monkey Boots but is considered one of the most fashionable military Boots

With the close economic relationship between Japan and the United States after the war, and the emergence of Amekaji style, Monkey Boots, one of the representatives of American style, is no exception to the Japanese. The Japanese did not think it was "ugly" and were scared away. It relies on the existing culture carried by Monkey Boots, integrates into its own unique Amekaji style, and finally re-creates and forms its own things.

In Japan, it is necessary to mention the artisan who is engaged in the manufacture of shoes and boots. As a craftsman, the most typical temperament is that he has a kind of self-respect close to conceit for his craft. He pays attention to the perfection of details, pursues perfection and strives for perfection. So the brand that is in Japanese manual boot and a lot of countries is opposite compare on, often do not have price advantage, but good use feels and simple sense, absolute value of money is worth, and still can feel, the sincerity of craftsman and sincerity.

In Japan and European and American countries where shoe culture is popular, there is a pair of boots that can be worn for ten years. Can provide daily maintenance of shoes and boots, sole replacement services. From the selection of quality to the manual production to the foot to after-sales service, you can feel the rich cultural background behind it. If you're interested in retro culture, get a pair of vintage biker boots.

At present, the boot culture of Amekaji is still a minority hobby in China. How to make Chinese people accept this culture and recognize this culture still needs time to adapt. Very few people wear clothes in China, but that's what makes it possible. Because good design is universal and attractive. Although people who instinctively feel ugly and dare not wear these boots are still in the majority, can jumping out of the box of pure vision and feeling the culture behind it better help us to establish our true aesthetic sense and form a culture more suitable for us?