- Army shoes are the fighting force of infantry. With a good pair of shoes, infantry can be faster than cavalry

Military experts have argued that modern infantry mobility is actually superior to cavalry. The reason is that the horses sprint fast but have a serious lack of endurance. For example, soldiers are not allowed to ride horses during the march of cavalry troops. To save the horse's strength. Moreover, the horses are heavily dependent on feed supplies, which are difficult to replenish on the spot in a military environment, further limiting the mobility of cavalry. However, it is possible to make infantry faster than cavalry. Only the organization and equipment level of modern infantry can be achieved. The simplest example is the shoes worn by soldiers. Most of the ancient infantry fought barefoot, but only the modern infantry had the shoes for a long and fast march. For example, during the American civil war, infantry was faster than cavalry, and it was even more common during world war Ⅱ.

Modern people are not short of shoes to wear, but military supplies and civilian supplies in the design purpose and supply object have a considerable gap, and the United States Marine corps active use of military boots bailey Willie 550ST, is a civilian can come into contact with military supplies. This military boot is the U.S. army's desert combat boot, full name is Belleville 550ST USMC desert boot, which is distributed to the U.S. Marine corps. From the official publicity, this pair of military boots can be said to use a variety of advanced design, and excellent raw materials and manufacturing technology, with very good comfort performance and practicality. Of course, the actual dress and official propaganda, there must be a very big gap. 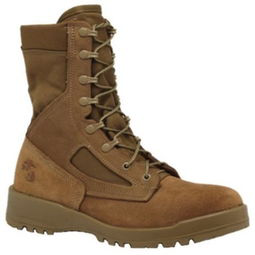 The 550ST is a us military active desert boot, which is quick-drying and breathable, with two drain holes on each side to emphasize quick-drying for drainage, as well as a wide version of the tree size designed for easterners. Suitable for wear in the desert or the tropics, the manufacturers claim the same comfort as sneakers. Of course, in China, where there is no desert war, these boots are also versatile, for hiking, mountaineering and equestrian. Who wouldn't want a pair of cool, wearable shoes?

First of all, the advantages, after wearing this military boots, must affirm the quality of the United States military. These military boots are very sturdy indeed. Shoelaces are cordage resistant to cut and tear, the sole of the Italian-made VIBRAM is gold and low, and the front is a metal shatterproof steel toe. The most obvious feeling is that they are very heavy. A pair of military boots weighs about 1.5 kg, but their heavy bottom and strong steel head make it clear that this pair of military boots must be quite durable and conducive to close combat. And through the walking experience, can draw the conclusion that this kind of military boots is really good.

In addition, the boots do have a good waterproof performance, through the actual test found that as long as the water does not flood the upper, to reach the drainage outlet, then the water will not enter the inside of the boots. Even if you wade through deep water, if you walk fast enough, you won't get any water at the drain. So the boots actually give the soldier the ability to move quickly through shallower waters without compromising comfort. Especially after the author carries on the test in the shallower pool to discover military boots surface has the very good water resistance performance, There is no trace after being drenched by water, the droplet just like hitting on the lotus leaf will disperse quickly, and will not stay or absorb.

Of course, although this kind of military boots indeed conforms to baili's official propaganda of strong durability and waterproof and non-slip, military products are military products after all, no matter how the design and comfort can not be compared with civilian products. According to baili, the boots also come in a range of high-tech designs that use high-performance sweat absorbers, patented fabrics that absorb moisture and promote normal sweating, which make them feel relaxed, but actually look different.

Compared with the average sneakers of various brands, the air permeability of military boots is definitely a few grades worse. After all, in the pursuit of protection and durability, its air permeability is unlikely to be as cool as advertised. At the same time, a pair of military boots weighs about two kilograms, and their heavy soles and steel heads in the front make fast running not very convenient. Therefore, for ordinary people, if it is not for the special high requirements of waterproof and tear resistance in normal life, the choice of ordinary civilian products is definitely more suitable than this military product.