Jungle boots are reborn in America

Jungle boots are reborn in America

- After 12 years, the U.S. army has restarted its jungle boot distribution program

Veterans must have a special affection for the old jungle boots. The army's jungle boot design, which has been around for more than 40 years since the first 12 years of the war, seems to have been forgotten.

Over the past few years, many vendors have introduced a variety of jungle boots, including the recently disbanded OTB, 5.11 tactics, Oakley LSA terrain water boots and Rocky. So does a Recondo recently launched by Bates.

Earlier this year, the defense logistics procurement agency even created a new NSN number for Garment's T8 "quick-dry boots." Although the boot does not comply with the bailey act and does not exist in the storage system.

Now, with the Pacific center strategy and the reopening of the Hawaiian jungle school, the army's soldier personal equipment office is finally listening to the calls that combat troops have been making for years for jungle boots. About a month ago, PEO's individual soldier defense and personal equipment program manager, col. Robert Mortlock, began a web office search for new boots that fit the bill. The early news is that the boot will be evaluated under the army's re-opened soldier enhancement program, with models selected from existing commercial boots. 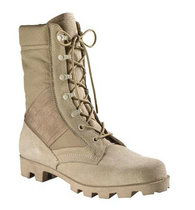 At the moment, only two boots seem to have made the cut, and one of them is out. Col. Mortlork's public comments were not encouraging, as if the army had discovered a new concept called direct die forming outsole. Mortlork called it a straight outsole in an army press release, and given that he mentioned gluing the outsole in his talk, he didn't know what he was talking about. The glue will fail in hot and humid conditions, and you'll see your boots break up into pieces.

With this in mind, the direct molded outsole, also known as "vulcanized rubber" outsole, is not glued but is fixed and formed by hot pressing, and both the base and leather high top were used on the jungle boots worn in basic training in the 1990s.Below are models from the 1960s and 1970s.The leather combat boots that were issued later changed the sole texture, added a padded collar and quick-wear LACES.

The army has nothing new so far. The technology to make the soles was developed 60 years ago by a Wellco division called Ro-search. Unfortunately, no one outside Altama and Wellco owns the equipment for the technology, because the companies lease equipment and molds instead of selling them to shoe manufacturers that do government contracts. The equipment and molds will be returned to their original owners when tender requirements change, such as the military's request for a more comfortable midsole and better structural design. Once the jungle boots were abandoned, that capacity was abandoned.

Fortunately, the army finally got it right and sent out the RFI. The announcement will allow industry players to show the military where they stand best and prove their ability to get their hands on the new bush boots. Hopefully the bidding requirements will be more progressive when it is finally made public.

1) durability must be achieved in a jungle environment for more than 12 months, with high humidity and repeated flooding conditions foreseen

2) quick drying and high permeability, wearing can make moisture and heat out of the boot body

3) the drainage hole that can drain water during walking

5) highlight the heel, especially when walking soft and muddy downhill to enhance grip

7) the outsole provides excellent grip and propulsion, which can effectively brake and maintain balance when walking in muddy water up and down gentle slope

8) ensure that mud, sediment, debris, etc. do not enter the boots when deep mud pits are over the water

This list looks like a dream, which is a good thing. But there are a few things. Humans are not very good at learning lessons, as will soon become clear - the lessons of the past few wars have been forgotten.

These boots must not have any padding or lining. Back in the '90s, the Natick had jungle boots with a padded collar and black. As long as you wear the boots for tropical activities, the padding will absorb water. Black is more for uniform than camouflage. At least the leather is smooth, full - grain. There are many problems in the hot and humid environment with common furs. These are the lessons of world war ii in the Pacific. Another problem is that producers will want to add various forms of cushioning to improve comfort. Don't. That thing absorbs water. As for the midsole, I don't see any protection requirements for the "ground thorn" trap. Such traps are an essential element of jungle warfare.

In place of the midsole, the army shipped a saran mesh pad with the bush boot, a built-in pad that protected the soles of soldiers' feet from stress and helped keep the boot dry. This is crucial in a jungle setting. In the end, no one has yet been able to surpass the Vietnam-era invention of the Panamanian bottom, despite the high demand for it. Its performance in mud removal and grip is far superior to the common bump bottom, which is often covered with mud. As far as I'm concerned, hopefully Altama will bring out their classic '60s burly jungle boots and pair them with panama soles as a reference group for the new design.