As is known to all, a pair of military boots with excellent performance can not only effectively reduce the possible lower limb injuries of officers and soldiers in the training and combat process, but also provide a reliable guarantee for the victory of the battle. However, restricted by economic and other factors, it was not until 2007 that the Chinese army began to issue combat boots in the whole army for the first time -- 07 combat boots.

As an important part of type 07 new military uniform, 07 combat boots have attracted great attention at home and abroad since the moment when the troops were distributed. In fact, the names and prices of 03 combat boots and 97 combat boots were printed in the previous directory of the Chinese military, but the former were only distributed on a small scale to those who were then engaged in special operations and peacekeeping missions, while the latter only appeared under the feet of the soldiers of the PLA Hong Kong garrison and the PLA Macao garrison. This is the first time in the history of the Chinese military that the boots will be distributed across all branches of the armed forces and the armed police. 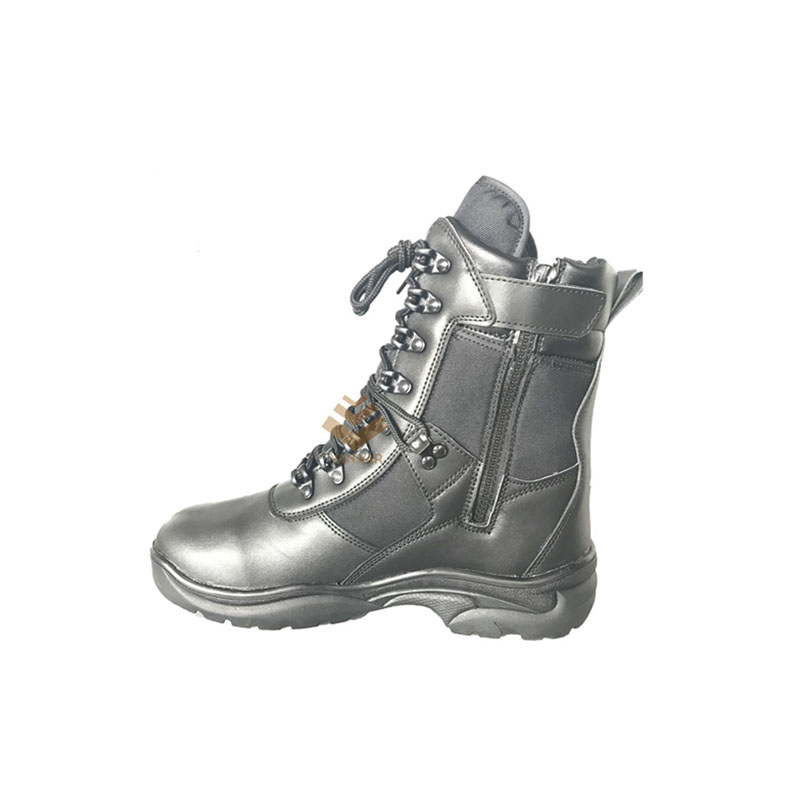 The 17 combat boots are an improvement over the 07 combat boots. Through the comparison of several military boots, it is not difficult to find that the 07 combat boots currently equipped are improved on the basis of the original 03 combat boots, and their overall design is somewhat similar to the design idea of the American bush combat boots. From the appearance, this boot adopts the front opening lacing type and USES the copper u-shaped quick pull ring, which not only facilitates the adjustment of the tightness of the instep, but also solves the difficulty of wearing and removing the buttonhole military boots (such as 97 combat boots) in the past. In case of emergency or emergency, simply pull up the LACES to tighten them quickly, and take off by pulling the tops to the sides after untying the LACES.

This is an important improvement over the flying boots, paratroopers' boots and naval boots that were only issued to specific posts in the service and arms. On the basis of fully retaining this design, 17 combat boots further improved and modified the shape and system, moderately reduced the quick-draw ring and adjusted it from the original fixed fastener to make it more reasonable and comfortable in the wearing process.

07 combat boots adopt waterproof leather and canvas with waterproof and flame-retardant function as the upper surface material of combat boots. 17 combat boots are still in use, but they are more fine in material selection and workmanship, and the shoe tongue with sand-proof function is enlarged. It is very practical in the march process of grassland and desert areas. This also shows that the boots of the Chinese army are gradually advanced on the basis of the previous successful experience. However, 17 battle boots biggest "bright spot", be nothing more than in view of army officers and men general report 07 battle boots "too heavy, too stuffy, too hard" and undertake improvement.

Thanks to improved materials and technology, the 17 combat boots are 20 percent lighter than the 07 combat boots currently deployed. Even today's combat boots weigh 300 grams less than the 550ST Belleville on the battlefield, about the same as the ICB and the standard combat boots of the Russian army. Thus, 17 combat boots in the main countries in the current combat boots have been a relatively light boots.

Of course, in addition to the comfort and practicality brought by the weight and wear-resisting degree of the sole, the most important protective function of the sole is to prevent being punctured by sharp objects. If the latter is sacrificed for the comfort of the wearer, it is not worth the cost as a military boot. In this respect, the experience of the Vietnam war in the us military feel particularly deep. Even Powell, who became chairman of the joint chiefs of staff a few days later, left the battlefield after his boots were pierced by a bamboo stick planted by the Vietnamese. So, since the Vietnam war, the U.S. military has put stronger, stable-proof steel inside boots.

By the 1990s, kevlar, which is lighter and more comfortable, was used as the sole protection. And the kevlar that 07 battle boots place adds to install stabs layer and leather chamber bottom are in certain degree even better than the effect that American army boots stabs. However, due to the choice of materials and design, the sole elasticity of 07 combat boots is relatively poor. At the same time, the use of waterproof fabric also affects the overall breathability and moisture permeability of the boots, reducing the comfort level. However, according to the current situation, it is because of the use of new materials and new technologies with light, soft, quick-drying and bactericidal properties that the anti-puncture ability of 17 combat boots is stronger and the comfort of the sole is better.

It should be noted that the development of military boots and even the whole military supply outfit is always closely related to the combat and training tasks faced by the army, and the distribution of 17 combat boots is no exception. US in boots in a mature, for example, due to the current around the world in the face of different combat mission, American troops had to follow operations geographic characteristics and operations combat requirements to design to develop different kinds of boots, and in use process in a timely manner using the latest materials technology design means to continuously improve and perfect.

Take, for example, the desert combat boots worn by us troops in Iraq and Afghanistan, which were designed for the US military during the gulf war in the 1990s.For better air and moisture permeability, the American army used cool-max material in the lining of the boots. After the Iraq war in 2003, according to the feedback of American soldiers on the battlefield, the boots were improved for many times, and even adopted the Vibram soles which are easy to wear instead of Panama soles to increase comfort and shock absorption.

At present, with the aid of advanced scientific research methods, especially the research results of biomechanics and large-scale investment, every country is increasing the development of military boots.

The manufacturing process of Chinese army boots is very advanced. China is a big shoemaking country and many foreign military orders are actually made and processed in China. The reason why they will be related to the combat effectiveness of the army orders to our country manufacturers not only focus on production costs, more importantly and the overall level of China's shoe industry and technology have a close relationship.

In addition, Chinese military boots are very cost-effective. The equipment of military personnel has always been tied to the overall size of the military and the economic strength of the country. Compared with foreign military boots that cost hundreds of dollars, the price of 07 combat boots is always controlled at about 30 dollars. Although the cost of 17 combat boots has been increased, it is still within the controllable range. This is in line with the overall size of the Chinese military and China's national conditions.

Due to China's vast territory and complex terrain, the operational environment and operational tasks vary greatly. Therefore, although 17 combat boots were launched 10 years later after 07 combat boots, the military supply department successively developed 17 combat boots during this 10 years, aiming to accumulate experience and find problems on the basis of solving urgent needs, so as to find a breakthrough for the improvement of general combat boots in the next step.

Military boots because of the special mission, it is not ordinary people see a pair of shoes so simple. Western military powers such as the US military also want to develop a versatile combat boot that can be used in any environment, and have so far failed to do so. But generally speaking, waterproof, flame-retardant, puncture resistant, wear-resistant, slip resistant, breathable and moisture-permeable, cushioning and shock absorbing, as well as the shape and color matching with the battlefield environment, are always the future research and development direction of military boots of various countries.

It is believed that with the deployment of 17 combat boots, the development of quilt and outfit of the Chinese army will also rise to a new stage of development.