- BLUNSTONE can meet all your needs for boots, which has been its pursuit for a century

A pair of incredibly comfortable boots - BLUNDSTONE is one of Australia's most prestigious work boot brands and internationally renowned. It is the originator of Elastic Boot. It was born in 1870, has gone through more than 140 years of brand precipitation, in different countries and regions have a large number of loyal supporters. In recent years, BLUNDSTONE has become popular in Japan, the gathering place of Asian fashion, and became popular with boot lovers. In 2013, BLUNDSTONE entered the Chinese market, spreading its century-old shoemaking culture and continuing to perform the classic legend of fashion. 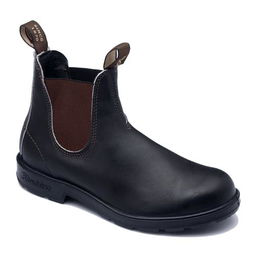 "We've always known about BLUNDSTONE, and it's iconic. But now you see a lot of people wearing it on the street." "We brought in BLUNDSTONE to meet the demand for Chelsea boots," said Tom Kalenderian, executive vice President of menswear at Barneys. "some customers liked the look of Chelsea boots but wanted rubber soles. BLUNDSTONE looks like the original Chelsea boot." But BLUNDSTONE is more widely known in the United States because of the more consumer-friendly J.Crew. Since 2011, j. cube has started to include BLUNDSTONE in its Showroom.

If you look closely, Tom Kalenderian and Frank Muytjens come from both companies' menswear departments. This is actually related to the original design of BLUNDSTONE, which is listed in the men's category in the e-commerce channels of Nordstrom, J.Crew and Barneys. Originally, BLUNDSTONE was also publicly known as a genderless brand. Female consumers and male consumers are also very similar in buying their favorite styles, namely, 550s, 510s and 561s.It's just that male shoppers choose larger sizes, while female shoppers choose smaller sizes. When BLUNDSTONE developed boots specifically for women, the brand became popular with female consumers and became more closely related to fashion.

Steve Gunn believes the turning point for BLUNDSTONE came in 2007.To save costs, BLUNDSTONE moved its plants from Australia to India and Thailand. This production chain expertise has also helped BLUNDSTONE enter other markets. Over the past 10 years, BLUNDSTONE has traveled to Canada, Italy, and Sweden. According to BLUNDSTONE, sales have doubled in the past five years, to 3 million pairs a year.

Now, Israel is its second largest market, and basically everyone has a pair of shoes. Steve Gunn: "in Israel, BLUNDSTONE is like a uniform.

BLUNDSTONE specialty made elastic double-sided boots is its representative product, the oil surface tanned leather material is light and firm. The classic of the classics is a black, brown pair of boots. The oil level of these styles to choose high quality cowhide, tie-in light TPU molded sole, has a good waterproof, anti-fouling, prevent sweat, feel is good, rich toughness, 4 mm soles indented form the best antiskid barrier, whether it is a sunny day, or rainy day, or the snow day, BLUNDSTONE can meet your demand for shoes. These are the persistent pursuits of BLUNDSTONE for more than a century, and the brand culture endowed by the colorful and rich territory of Australia.

Compared with 500 series, 550 comfort series is more delicate and comfortable. It USES PORON®XRD™ inserts in the heel and toe of the sole to absorb up to 90% of the pressure generated during each step. In addition, PORON®XRD™ materials are also injected with antibacterial agents, which can effectively inhibit the growth of bacteria, prevent mildew, reduce the generation of bad odor, keep the shoes fresh and clean, and further improve the comfort of shoes.561 and 585 vamp do old effect, more add fashionable breath.

BLUNDSTONE is environmentally conscious, so it's very careful with the materials it USES to keep the shoes comfortable. Although it is a brand of work boots, but its biggest characteristics can be used to describe the "soft inside and strong outside". Because it looks rough, strong and durable, it can adapt to all kinds of environment, but the sole is very light. The shoe bed has a patented Shock Protection System, which can relieve the pressure of the body on the feet when walking. In addition, its insoles still can replace, sole has good prevent slippery sex. With many advantages, BLUNDSTONE is a very practical item.

The New York times gave the brand some credit: "if you're talking about Australia's new influence, you can see it on the streets of New York." Now, the brand has attracted enough attention from consumers that the 519 Boot used in J.Crew's November AD has sold out. Google's smart search included a few more sentences like "how do the BLUNDSTONES go with a coat?" and "how do the BLUNDSTONES go with a skirt?"

The company is also trying to promote itself. Last year, Canada Goose went to the international men's wear Show Pitti Uomo in Florence. It also went to the Sundance film festival as a sponsor. Gunn also revealed that they will continue to consider entering fashion retailers. Still, Steve Gunn says the BLUNDSTONES want to be careful. Over the next two years, BLUNDSTONES will be developing more women's models, but at the same time "struggling to get more popular."

"Our boots also look great with high-end ready-to-wear, but I don't think BLUNDSTONE is going in a fashion direction because we have more content." "We don't want to be a fashion brand because today's fashion is tomorrow's history," says Steve Gunn.