- These are quartermaster products, and each of our production processes is quite rigorous, and we strive to deliver quality assured products to our customers

Chinese sailors march during a military parade to celebrate the 70th anniversary of the founding of the People's Republic of China in Beijing, capital of China, Oct. 1. 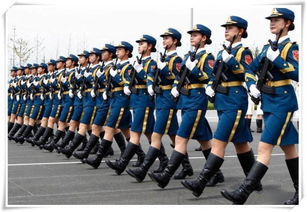 In this year's military parade to celebrate the 70th anniversary of the founding of the People's Republic of China in Beijing on October 1, soldiers wearing leather boots, march with sonorous and powerful footsteps, with the momentum of a sea of mountains through Tian’an men square. Do you know, in this review of 15 troops on foot, there are 11 troops parade boots by a company in Dongguan Chang 'an research and development production?

How to make every soldier wear proper parade boots? Are there any special techniques for making military parade boots?

Located in Wu Sha community, Chang 'an town, Dongguan city, China, Guangdong Wan Lima Industry Co.Ltd. This year, at the military parade marking the 70th anniversary of the founding of the People's Republic of China, 11 teams on foot wore military boots made from Wan li horses.

Workers are busy on the production line on the first floor of the factory. "This is our testing workshop, where all leathers are tested to see if they are up to standard." Wan li ma office director Yan Shenhui told reporters. In the finished product workshop on the second floor, workers are making final checks." These are quartermaster products, and every process we go through is very rigorous, and we try to get quality products into the hands of our customers." Yan Shenhui said.

Yan Shenhui looked proud as he said the soldiers walked through Tian 'an men square in their military parade boots. He told reporters that after receiving the task of producing military parade boots, Wan Li horse took the instructions and requirements of the joint military parade command as the outline, from research and development, material preparation, production to quality inspection and other links are carried out in accordance with high standards. In order to make each soldier wear well-fitting and comfortable boots, Wan Lima has set up a military parade service foot measurement team to establish a complete foot type database and customize the boots according to the foot type of each soldier.

During the R&D and design stage, the company's employees went to the parade village for many times to improve and innovate the sole pattern, hardness and material formula according to the feedback from the soldiers, so as to further strengthen the functionality and applicability of the parade shoes.

The soldiers' training is particularly intensive. The production of parade boots has strengthened the wear resistance index of raw materials, and the pattern, hardness and material formula of the sole have been adjusted to ensure the wear resistance of leather boots.

Soldiers training just when the weather is hot season, training every day to walk to kick tens of thousands of goose-step, the intensity is very large. Besides high wear resistance, parade boots also have high requirements for air permeability, heat dissipation and sweat absorption. For this purpose, we choose the soft cowhide with good air permeability, and add the air permeability device on the upper surface of the boots to ensure the air permeability of the boots in the high-intensity training environment. In addition, also for each pair of boots with a number of pairs of anti-bacterial, high bullet, sweat absorption quickly dry spare insoles, to ensure wear comfort.

According to the company's technical staff, the production of military parade boots has a strict set of standards and technical specifications, in the strict implementation of the standards on the basis of re-development and innovation, which is completely different from the production of other conventional boots.

In order to make the soldiers in the parade of footsteps strong and uniform, the company has made changes to the technology and material. The troops are required to have uniform movements, clang and forceful steps, and to be uniform from any point of view. Among the officers and men, some are about 1.8 meters tall, while others are about 1.7 meters tall. Their age and height span are large. The technical department of the company used special design and special technology for the shorter officers and men, and finally made the whole team as high as possible.

The company has long experience in serving the military and undertaking various emergency missions. The military parade boots produced by the company have been tried on in small batches for many times, and stood out in the process of trying on, with various performance indicators meeting the needs of the military parade. Finally, the boots were determined as the standard products of more than a dozen foot teams by relevant departments.

Before mass production, it was found that after a period of training, the height of some officers and men would change, and their legs and feet would also change to different degrees, which meant that large-scale production of parade boots could not be achieved. For this reason, the company set up service foot type measurement team, the parade for each a specially-built troops foot type, single and double measurement, single and double design, single production, custom quantity foot, and adjusted to the height change shoe heel height, in order to achieve the whole parade on the unity on the visual effect, ensure every specially-built officers and men to wear suits your foot type boots.

Parade training is intense and shoes wear out quickly. In addition, participants are required to walk with a goose-step, straighten their legs and apply force to their feet so that the steps are orderly and sonorous. Compared with the products worn at ordinary times, the wear resistance index of the raw materials of the military parade boots and the requirements of the sound of the ground are relatively high, but also to ensure that all the participants can not kick off the shoes in the process of goose-stepping.