Do you know Red Wing boots

-A brand of shoes designed individually for workers in each industry

In the late 19th century, the site of Red Wing in Minnesota, USA, was originally an Indian territory. Later, when white people came to develop it, it became a hot place for entrepreneurship and a place to realize the American dream. Because of the high yield of wheat, the agriculture here has been very developed. A few years later, natural clay resources were discovered and a new ceramic industry was developed.

Warehouses and factories must be built to accommodate these booming industries. Many immigrants, including many from Europe, set up factories and workshops in the city and used the skills they had learned in their native countries. Redwing Wings  is the case, in the city on such a diligent and good luck, bring up the one hundred - year - old shoe company for many years, they started through the design can meet the demand of home industry shoe money, to the final expansion to meet the needs of workers across the country, thereby the foothold in the fierce competition of shoemaking industry.

How hard is Red Wing?

Although the brand initially designed only a pair of durable, durable, and well-protected labor protection shoes for the workers of the day, its durable workmanship made its name in the United States, making red wing the leading American boot-maker during world war I, and it became famous since then. The red wing perfected the craft, carried on the tradition, and went on to make boots for the U.S. army in world war Ⅱ.

In those days, Red wings were not so much work boots as labor shoes. Even the name Red Wing was copied and pasted by its founder, Charles Beckman, from the street name. The company is based in Minnesota, a former Indian state ruled by a Sioux chieftain named Wakuta, Red Wing. Later, the Indian culture gradually disappeared, people named the street Red Wing, the Red Wing is also named here.

Practical, clear, has always been the red wing style, even in the use of various shoe names, you can still see the professional characteristics of the year, such as: Engineer Boot, originally designed for railway engineers and truck drivers. The Lineman Boot was designed for wire workers. Iron Range mining workers' boots, specially designed for American miners during world war Ⅱ. Postman Shoes, designed for postal workers and police officers. For friends who like American retro style, red wing is a few not to spend in the past. Wild spokesmen Takuya Kimura and David Beckham have strengthened the brand's influence in Asia for the second time.

Beng once said that value does not equal price. This is especially true of the red wings, which are one of the few options with more value than price. Beng gives an example: a small handmade boot workshop may sell a pair of handmade boots for more than 5,000 yuan. It may have excellent craftsmanship, but the high price is more due to the high cost of raw materials, high labor cost and low production. But Red Wing is different. A pair of hand-made boots are made entirely on the assembly line, and the manpower and material resources have been reduced to the minimum. In addition, the sales volume and manufacturing scale are large, so the price is not high but the profit can be made.

Finally, the key to a good pair of shoes is leather, as well as various types of sole materials. Red Wing also has its own independent supply system. In 1987, Red Wing took S.B. Foot Tanning Co., the largest leather supplier in the United States, and basically ensured the quality, quantity and cost of raw materials. That's why the Red Wing is called a "late boot," referring to a well-selected, easy-to-use leather that gives the boot a "Aging" look after years of use. Red Wing its own research and development of mass production of wood base, anti-skid wear-resistant is to help it ascend the throne of cost-effective. 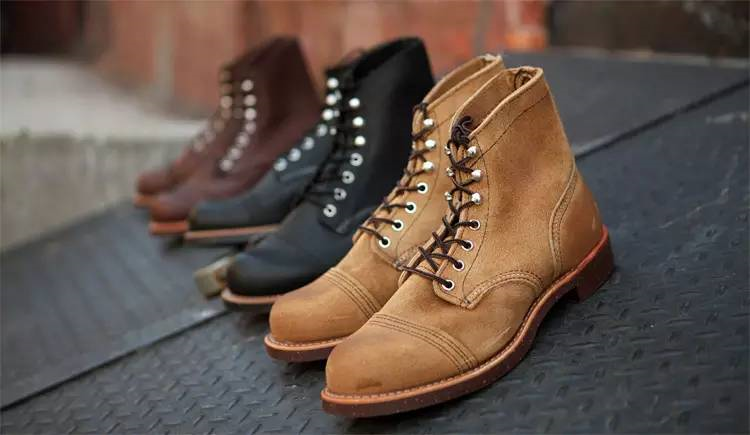 What are the characteristics of Red Wing boots?

First, goodyear stripes: the red wing boots are made by Goodyear, which means they can be replaced if the soles wear out and the upper lasts indefinitely. Second, Labels of different periods: on the inside of the tongue, there will be a brand label, which will be different for different years. Third, triple stitching: since the 1920s, every Red Wing Heritage shoe has been made with a line dipped in emulsion resin, which was legally sewed by the old Puritan sewing machine with two or three threads, thus ensuring firm quality and durability. Final, nitrile cork and wedge-shaped soles: one of Red Wing's biggest advances has been the addition of synthetic materials to the outsole, which saves money and makes the entire boot last longer. This is now a common practice, but the red wings were the first to do it.

Play red wings most afraid to mention foot sense of two words, again high cost performance, again excellent leather is difficult to cover its biggest problem, hard. Beng has said before that the red wing is both a retro entrance and an exit, a big reason is because the red wing is too hard and hard to work perfectly. Friends at the entrance may be intoxicated with the sensation of opening up a new world, a pair of poisons that never stop, but each pair does not take enough time to truly feel the charm. The friend that exit is more value red wing "thin body" hind lightweight configuration, easy to wear collocation, but this is easy to wear often is to find a pair of insole that suits oneself size very much actually, improved the foot feeling of Red Wing thereby.