- There's so much about soldiers' combat boots

As is known to all, life in the army is busy. Every day is about three o 'clock and one line of life. Training ground, canteen, dormitory, the main daily training. Every soldier, can a few years of training, become strong is not unreasonable. It was because of the strict training of the army that the change took place. Clothes and shoes are important to every soldier. China's military uniform and boots have also changed over the years. For example, liberation shoes, which were very popular in the past, were popular in the whole country at that time. Most people took this kind of shoes as fashion. What's different about the shoes soldiers wear when they train in the army today? 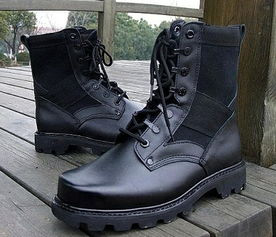 Soldiers' combat boots are called land rovers. Many people know that "land rover" is a famous off-road vehicle in the world, so why this famous car to compare the feet of combat boots, the original soldiers combat boots have a lot of magic.

Combat boots, is one of the soldiers military boots, is also indispensable shoes. The world's first combat boots, originated in the Roman empire. Modern combat boots were first developed by the us military. China began developing and equipping combat boots around 1997.The PLA combat boots have also been developed and improved over the years. What is the difference between combat boots and ordinary boots? For soldiers, combat boots can be of great use, as anyone who has ever been a soldier must know.

Combat boots, especially those in the style of long boots, have long been used to equip the army. During the second world war, except for the army of China, which maintained the style of plain living, most countries had combat boots. Our military didn't have professional combat boots until the 1990s, but there weren't many of them and they were first equipped by special forces. That is to say, our army did not have any professional combat boots to wear during the counter-attack against Vietnam, but it was because of that battlefield that the PLA people's liberation army had the combat boots that are now stable-proof, durable, hard to shape, and even bulletproof in the heels.

Combat boots have special treatment inside, wear on the feet do not rub the feet, also rarely have the discomfort of sweating. The material is made of leather, which is very durable. When in the field, wear combat boots, but also anti-skid wear. If you are in a wet rainforest, or if you have stepped on water, you will not get water into your shoes, which is also very waterproof.

Combat boots also support the calves and protect the ankles. In the wild, mosquitoes are more abundant, and sturdy combat boots protect soldiers from ankle injuries. Still have is, battle boots is worn on the foot, handsome cannot go. Not only has the powerful function, but also has the high appearance level.

In the development process of combat boots, the appearance of type 97 is of great significance, which makes the Chinese army realize the emergence of combat boots from nothing. According to relevant data shows that the boots from the famous American "panama" combat boots, but in the process of production, adopt advanced waterproof leather combined with compound rubber soles, joined the many innovative technologies, take extra layer structure of glass fiber reinforced plastic materials, increase the practicability and reliability of the boots, no matter in what kind of complex terrain can show a good protection and security, its overall level is not only good, far more than a few international war boots, is of epoch-making significance in the history of combat boots.

But the most affected by the people's liberation army soldiers are the most popular, the most widely used combat boots or 07 type, as the successor 03 type not only inherits the advantages of the former, more increased a lot of advantage, the theory of comfort and mobility and protective effect is very good, especially it to switch to the dual density soles, is a revolutionary design, not only reduce the weight of the boots, this increased the soles of the buffer, a wider range of application, also improve soldiers wearing comfort and fatigue resistance, it is said that even western soldiers.

Today's type 07 combat boots use Kevlar as their basic lining, which is lightweight and bullet proof. At the same time, the soldiers of the people's liberation army were always trapped by the Vietnamese army in the counter-attack against the Vietnamese self-defense. They also added steel plates and nails on the soles of the shoes. It can be said that ordinary nails can only be turned, never pierced.

Many people may see combat boots will think of boots, boots can not be worn for a long time? Is it worse for your feet, especially outdoors? Also somebody may feel this kind of boots heel high waist mountaineering boots very similar ah, very comfortable certainly? In fact, it is not as bad as imagined, nor as good as imagined. Those of you who have worn this kind of combat boots will know that these shoes will wear out over time. They are certainly not as comfortable as galoes and running shoes, but the sacrifice is worth it. More importantly, its front is also very protective of the foot. In fact, it can be done an experiment of hitting the foot with an ordinary hammer. Ordinary shoes can't protect against the hammer, but combat boots can.