-This is a versatile, functional and can be used in a variety of scenarios tactical boots

Tactical boots as a kind of military goods. Each part of the material is based on the battlefield and, over the years, the tactical boot has become increasingly context-specific. Therefore, not all tactical boots are suitable for daily commuting, and I have a habit of being outdoors on weekends, so I would like to have a tactical boot that can meet the outdoor needs.

A relatively thick, compact envelope formed by a cowhide surface on the outside, the design concept of which is described as armored tank. The outer layer of the cowhide cover protects the foot as well as the soldier. In terms of appearance, it is simple and calm. Such a single appearance is also conducive to a variety of collocation wear in different scenes. Its function also determines whether it can be used in different scenarios.

The BOA system first brings convenient wearing and stripping experience: if you want to fasten it, you only need to twist it; if you want to loosen it, you can finish it with a gentle pull and a "snap". Moreover, in the outdoor, the BOA system will not have the possibility of regular shoelaces being pulled and loosened by the outside vegetation.

So when outdoors, adjust good shoelace after go up foot, shoe body gives at double foot even joint effect. When tightening shoelaces, the effect of uniform shrinkage of the vamp, eliminating local pressure points.

As a tactical boot, the toe is deliberately paired with a thick layer of steel brushed rubber. This provides more solid protection than a conventional bump toe.

See shoe body part large area to have head layer to grind arenaceous cowhide with respect to data. Thickness of 2mm, the first layer of frosted cowhide is leather after the grinding machine frosted the surface of the feeling of fleece, making shoes after wearing more breathable, comfortable. And has a strong resistance to wear and bending.

The same is true when using outdoors when can be at ease in the road surface is changeful and have vamp constant external and repeated friction contact to wear. And not worry about upper wear.

In outdoor or tactical situations, the shoes need to be well wrapped and supported. It can be seen that the back position of the shoes has y-shaped "exoskeleton" TPU fabric for the upper to fix and support.

The y-shaped "exoskeleton" extends backwards and into an environmentally friendly heel position and does the same on the other side of the upper. Such tightening effect is obvious. This is also related to the whole shoe after wearing the package. Of course, the lifting shoelaces at the back bring convenience to wear and take off, and the reflective lifting shoelaces also increase the recognition at night, so as to improve safety.

When moving forward on a slope, the foot must be tilted after landing, and the foot, as a support for the whole body, must bear more pressure than usual when it is tilted. In this case, the shoes can provide favorable external support for the feet, absorbing the effect of pressure on the local position. This will reduce the chance of injuries such as sprained ankle. 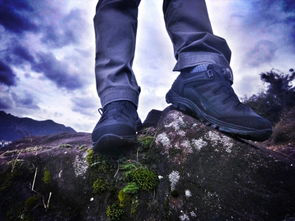 The effect of shock absorption is to reduce the compression of the knee and ankle during continuous movement. To reduce the wear and tear damage to the body.

Vibram outsole is familiar and is almost standard in high-end shoes. Because of the material itself, it is far superior to other rubber materials in anti-skid and abrasion resistance.

Material is powerful performance safeguard, the grain of additional sole also is important element. Just look at its texture, the particles in different positions of the soles of the feet are evenly oriented around, and all the particles have fine grain design on the surface of the claw. Thus brings the omni-directional control effect. And groove extension will also be beneficial to the sole from the discharge of sediment.

As such, recent walks on the slippery, mossy rock have brought a steady experience. And in the force uneven inclined plane activity. Because of the different orientations of the textures, the shoes can provide the necessary increase in grasping ability at the corresponding Angle. Also can see on muddy road sole can have the phenomenon of clay. But relatively few.

Dragon tooth has been designed to take into account the content of its tactical boots and has also made improvements suitable for daily use. This kind of improvement is actually in dragon tooth a variety of products are reflected. Of course, because of its performance, its easy to match in outdoor or tactical scenes is the use of various technical fabrics. And its composed, atmospheric appearance design is also another reason for its joker.

This is a strong function and can adapt to the use of a variety of scenarios tactical boots, whether military players or outdoor players to make a choice is very suitable.