Fake "made in America" military boots

Fake "made in America" military boots

—A famous American manufacturer of military boots has been charged with defrauding the government. It is suspected of outsourcing some of its work to foreign companies such as China and defrauding the military in the name of "made in America". Five executives of Wellco, an American manufacturer of military boots, have been convicted of fraud, smuggling and other offences. Their sentences ranged from six months in prison to five years on probation. 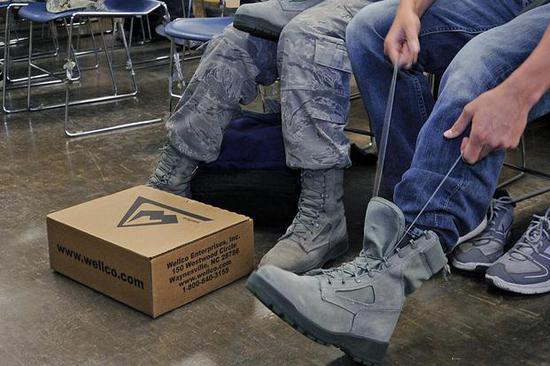 Wellco, founded in 1941, is the oldest American boot manufacturer, according to us news reports. Their boots were once standard battlefield equipment for the U.S. military and have been supplied to the defense department for more than 60 years. American generals used Wellco boots as standard equipment in the gulf war. From 2006 to 2012, Wellco supplied more than $138 million worth of military boots to the U.S. department of defense.

The five defendants were all arrested in September 2016 and charged with wire fraud and smuggling, the report said. Prosecutors accused the five defendants of importing military boots from China and other countries and then lying to the us government and public that they were "made in America".

Federal prosecutors filed an indictment in a district court. They say the company's chief executive outsourced the work without telling the board, giving the pentagon, government contractors and the public the impression that its products were "made in America." The boots, worth more than $81 million, were actually made mostly in China, with a small number in Peru and the Dominican republic.

Executives sell shoes and insoles under the name "made in America" in an effort to aggressively sell them to the U.S. government and comply with certain domestic priorities laws.

The prosecutor's indictment details the deception. While members of the company were actively marketing their products to the ministry of defense, they secretly handed over production of military boot uppers to Chinese companies. In particular, he instructed Chinese companies to sew a detachable "made in China" label onto the uppers of their shoes and ship them to their factories, where they would be torn off and replaced with an American flag and a "made in America" label.

One of the executives was given a six-month suspended sentence, and four were given six months to five years of probation.

In May 2007, two investment companies bought Wellco for $22 million as a subsidiary of Tactical Holdings Operations.

Vincent Ferguson, 66, President, CEO and director of Wellco from March 2006 to November 2012, became chief executive of Tactical Holdings Operations after the acquisition and promised to "do everything we can to move the plant around."

Wellco filed for bankruptcy in July 2014, a month before it was acquired by Original Footwear Holdings.

Russia's "made in the USA" military boots may turn out to be "made in China", which is hard for some Americans to accept, especially in the run-up to the us presidential election. Political analyst Lionel says Wellco's prosecution comes at a time when it could not be worse. These boots are not only representative of American productivity and manufacturing capacity, but also military.

Li Daguang, a professor at the department of military science, technology and military equipment at China's national defense university, told the global times on Thursday that the us has strict regulations on military production, but these regulations mainly target aircraft, artillery and other major weapons, which are handled by designated military contractors. Military boots belong to the army logistics life support supplies, also military and civilian, and there is no strict regulations, the source is also very extensive.

But China's production of American military goods has caused a lot of trouble. In 2014, the flag carried by American soldiers in battle was found to be "made in China." Congress then passed a bill requiring the defense department to purchase only "made in America" flags. Before that, there was controversy over American soldiers wearing "made in China" berets . Forbes magazine has revealed that Chinese products entering the us military are not limited to primary products . The us military USES a lot of electronic components including "made in China" . "Made in China" is rightfully excluded from the sensitive military sector, which represents the image of the United States. The logic of American politicians is much the same: in the name of national security or national image, the ultimate worry is about "threats" to American jobs.