In the past two years, a number of films and television programs showing the features of Chinese soldiers in the new period have appeared on Chinese screens. Hold the 07 type combat boots of practical and beautiful appearance coincidentally to serve as "standard prop" one of. Not everyone remembers that the Chinese army was generally equipped with military boots only a decade ago. Over the past century or so, from straw and cloth shoes to "liberation shoes" and military boots, China's soldiers have become more sophisticated in their footwear, a sign of the country's overall rising power.

China has been a self-sufficient textile country since ancient times. Almost since the tang dynasty, shoes worn by Chinese soldiers were mostly made of thick and hard yarn. In the mid-19th century, with the rise of the Westernization Movement, the Qing government established a new army in accordance with the European style. In addition to modern guns, officers and soldiers were generally equipped with yellow-brown leather low-waist military boots, which was the first time for Chinese soldiers to wear military boots. Chiang kai- shek started to set up the German arms division in the 1930s. Due to financial constraints, most of the soldiers, except a few elite ones, still wear cloth shoes or even straw sandals. 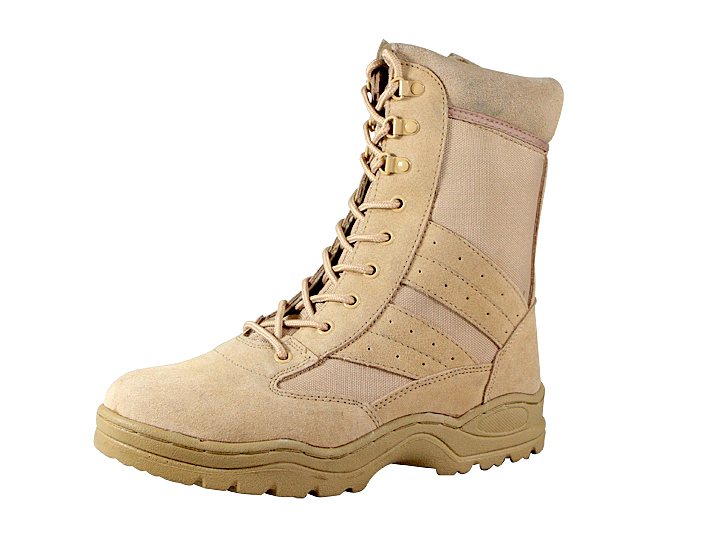 The outbreak of world war Ⅱ provided an opportunity for China to modernize its military. The national revolutionary army began to gear up British and American equipment, including military boots. However, Chiang kai-shek, who always favored the "central army", gave priority to his troops with aid materials. For example, the expeditionary force in India was equipped with British leather low-waisted black field boots, rubber low-waisted black "gala boots" and British brown rubber shoes. Later, some combat units issued M43 and M42 combat boots. These two kinds of boots are very wear-resisting, also enough "dignified", but a little heavy, street battle is inconvenient. After all, is this the first time that the Chinese military is in line with the rest of the world when it comes to shoes.

At the same time, the Chinese communist party led the armed forces of the system of military shoes appear a lot more simple. Even after 1949, due to economic difficulties, the shoes of People’s Liberation Army were mainly made of cloth. It was not long before, considering that cloth shoes were so inconvenient for long marches, they gradually gave way to rubber shoes. Only the navy submarines insisted on cloth shoes, citing the smell of rubber shoes and the fact that they were uncomfortable in enclosed cabins, so breathable cloth shoes were a favorite of submarines who did not need to hike.

Up to now, the PLA used the longest military shoes should be cloth rubber shoes, until the end of the last century before all out. The shoes are not only poorly breathable and wet-permeable, but also wear and tear, and are not particularly warm. In fact, for half a century, the Chinese army has hardly been equipped with any military boots, except for special arms, which is rare in the world. The boots are primarily designed to protect soldiers' feet from being hurt in combat -- from stabs, blows, and obstacles -- but they are cumbersome for the less mechanized Chinese army, making them less conducive to long trekking missions.

In the late 1990s, with the acceleration of the mechanization process of the army, China began to reform the large-scale equipment for individual soldiers, and adopted the molding technology. The type 97 military boots with better anti-slip performance became a popular product. It has anti-puncture ability. Western military researchers have claimed that the type 97 boots can be fitted with a "steel head" at the front, which not only protects the soldier's feet, but is also flexible.

Although boots have not been around for long, the Chinese intelligence and wisdom in light military industry has spawned several topical products. As in the 1990s, China developed the unique type 91 summer skydiving shoes. It is unique because the sole is designed with character, with hundreds of opposing rubber slopes, and has the best skid resistance of any military boot in the world. In addition, because the main effect of paratrooper boot is shockproof, this kind of sole ministry is more gentle, contain shockproof steel plate, can effectively disperse the impact force that hits the ground instantly, protect ankle, reduce the concussion to cerebrum.

With the burst of manufacturing capacity, since the beginning of this century, China has gradually become a "military procurement supermarket" for some countries, and Chinese military boots have also gone abroad, from small traditional countries in Asia and Africa to developed countries including the United States. A large number of Afghan soldiers would rather have Chinese military uniforms and boots than American good.