—Military boots are familiar to many military fans. They have appeared in almost every American war movie. Why do soldiers wear military boots? What's behind this?

The right pair of boots is one of the most important pieces of equipment for a soldier. The boots not only ensure a long march, but also effectively prevent the occurrence of diseases such as trench foot. In the past, Chinese army recruits received their first lesson from a veteran on how to play straw sandals, while the Russians taught them how to play foot-binding. The American soldiers are much better at this, and because of the ample supplies, the boots they wear are the best in workmanship and quality.

In the west, the ancient Roman period began to use animal fur to make army shoes, but for two thousand years the army shoes are mostly rough. During the civil war, American soldiers wore ugly, poorly made boots, even under the feet of generals. Strict Germans, by contrast, were far better at this. The first army boots, brown cowhide, were invented in Prussia in 1866.While the shoes of the French and British armies were low in world war I, the German army used high boots in Bismarck's day. By world war ii, western armies were dominated by high-top boots.

After world war ii, the U.S. military fought around the world, and its military shoe research is ongoing. In Vietnam, for example, the traditional all-cowhide combat boots gave American soldiers a hard time. They are bulky, poorly breathable and slip easily. So the American army developed tropical boots, made of moisture-resistant nylon and leather, with two air holes, the stripe design of the sole of the boot is easier to remove the dirt stained, and there is a steel plate in the sole, to prevent the boot from being pierced by sharp things.

Nike's influence in China can be illustrated by the following example: the average primary and secondary school students know that Air Force is a shoe owned by Nike before they know its real meaning of "Air Force".

This kind of mass culture spreads more efficiently than the textbooks. As a person in the military culture circle, I also learned at a certain point that Nike also designed SFB boots for The American soldiers. It feels like we knew when we were kids that the Air Force was not just "Air Force" but "Air Force".

The army's combat boots have finally been commercialized since the army introduced the new UCP camouflage military ACU (army combat uniform) and matching earthy boots in 2002. 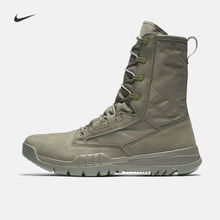 Nike's product is called SFB, Special Field Boots. The name comes from the legendary experience of Bill Bowerman, one of the founders of the manufacturer. Bill Bowerman, who graduated from the university of Oregon in the 1940s, was one of many young Americans who learned of Pearl Harbor and President Roosevelt's declaration of war on Japan. After joining the army, he served as a second lieutenant in the army's 10th mountain division. During world war ii, he served with the army in Italy and won the bronze star for his excellent performance.

After retiring, Bowerman returned to Oregon on the west coast and coached his Alma mater, the university of Oregon, in 1948."Field" in English refers to "training" and "Field" in military context, while "Field" and "Field" in sports. Therefore, Special Field Boots not only contains the background of one of the founders Bill Bowerman's military career and sports career, but also indicates that the Boots are capable of multi-directional military and sports training environment.

The first combat boot in the SFB series showcased Nike's advantage in lightweight production, with a single combat boot weighing just 0.9 kg, lighter than any Nike outdoor boot. In addition, the classic SFB combat boots are well-cut, quick-drying and flexible. More like sneakers than combat boots, they are ideal for military personnel participating in sports and daily duties.

Nike has applied sneaker technology to the production of SFB military boots, providing athletes with maximum flexibility and movement space. The leather material is wear-resistant and the canvas material breathable. Each boot also has two air holes on one side to help drain moisture and air. Unlike the single sole of a traditional military boot, the SFB's sole is made up of eight small soles that are bulky.

In 2014 Nike reintroduced the second generation of SFB combat boots, which are still lightweight and flexible. Due to the thickness of lining inside the boots, the overall weight increased, but on the other hand, a large area of canvas was used instead of synthetic leather material in the ankle and the boot to keep the weight of the shoes around 0.9 kg. In 2017, the SFB introduced the Jungle version of the army ar670-1 and a lighter LT version.

The military isn't working in the field all year round or in the Middle East war zone that many military fans imagine. Even the most trained infantry, scouts and others have a lot of time in the camp indoor activities to do physical examination, listen to lectures, repair equipment, inventory warehouse, update personal certificates and information on the Internet, so a pair of light comfortable boots and a pair of durable stone boots in turn is the best choice.

The advantages of Nike military boots

It is true that the SFB looks like running shoes rather than military boots. Comfortable, lightweight military boots are absolutely the best choice for soldiers to train in the camp; It is also more suitable for the military fans. At 160-180, Nike boots are in the middle of the pack (the cheapest ROCKY boots are $90, while the most expensive Bellevue and Danner have nearly $300) and are worth it.