The history of American jungle boots

- The evolution history of jungle boots, let us see the American logistics equipment to combat the actual needs of the main, let the equipment for the service of the design concept

Jungle boots, as the name suggests, are combat boots worn in jungle combat. Half a century ago, in response to the sweltering conditions of the jungle in Vietnam, the us military, with its extreme emphasis on boots, developed bush boots for the jungle. The combat boot has undergone several changes to form a research and development line. 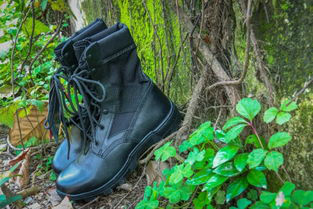 When it comes to bush boots, it's the U.S. army's first half-leather jungle boot. The boots are called Okinawan boots. The Okinawa boot grew out of two jungle boots developed by the U.S. military throughout world war Ⅱ to adapt to the tropical jungle. The boots use brown leather again as the main body to increase the protection of the feet. The waist of the boots adopts green canvas to increase the air permeability. The inside of the feet has two air holes to allow air permeability and quickly expel the sweat and water inside the shoes. Interestingly, the shoe's LACES only reach the ankle, while the waist is tightened by two helical loops. All in all, the combat boots retain a strong second world war style, both in color and in the way they are made.

Okinawan boots were introduced in the early 1960s by green berets in Vietnam. Soon, the problems of the Okinawa boot were exposed: its sole line was easily worn, the Japanese buckle on the boot waist was easy to catch branches and other objects, causing inconvenience of movement, and the foot part of the protection is not enough. The us military urgently needs to develop a jungle combat boot specifically for the jungle war in Vietnam. So the history of jungle boots really began.

The first real jungle boot was created in 1960, when the boots were all black, so the boots were made of black cowhide. The boots adopted the overall style of the black combat boots commonly equipped by the American army at that time. The nine pairs of air holes were extended from the foot to the waist, with air holes reserved on the inside of the foot, and leather strips were fixed on the top and back of the boots to enhance the upright feeling of the canvas boots waist.

The boots are unique in that they are molded with Vibram soles made of special rubber. Designed for mountaineering, the sole features increased friction to give it a firmer grip and is very durable. Because sole has V shape pattern, because this is military fan people again is called "V bottom" bush boots. However, the boots are very rare in existence and are hard to see.

The US army's second jungle boot is actually very similar to the first, except that the leather band around the boot waist has been replaced with a nylon band. It's also easy to understand, since at just an inch wide, leather strips don't wear as well as nylon and aren't as breathable. There is no specific age for the combat boot, but it is certainly later than the first jungle boot.

At present, the ankle of canvas waist boots all over the world have a wide strip of nylon with an oblique stitching. Many people think that this strip is mainly used to prevent sprain of ankle, but this is actually a mistake. The army has long used full-leather combat boots so heavily that the first two versions of the jungle boot were designed without a major detail: the ankle's canvas waist was torn by horizontal pull. To deal with this problem, the army improved the second bush boot by adding a wide nylon band around the ankle. This is the third jungle boot. Since the beginning of the third section, the u. s. bush boots above the sole of the part basically finalize the design, after the jungle boots are in the improvement of the sole up and down.

The third jungle boot also has the distinction of being the quintessential American combat boot for the Vietnam war. This is not only because of its longevity, but also because it has a special design for the jungle war in Vietnam.

When the Vietnamese guerrillas began to fight the Americans, they began to set up extensive sinkholes with bamboo sticks with dung on their heads. The third version of the bush boot has a splintered steel plate inserted into the soles of the boots to avoid getting stuck. In fact, the sole is only a psychological comfort, because in the case of high-speed fall, it has little protection. Former us secretary of state and retired four-star general Colin Powell was stabbed in the foot by a bamboo stick in a trap in Vietnam. Visible, puncture sole did not play a role at all.

When it came to the third version, the boots fell into two awkward situations: first, they didn't really protect against stings, and the rubber soles, while awesome, were designed with floral patterns that made them hard to slip in the often muddy jungles of Vietnam. Eventually, the army decided to replace the boots with Panamax soles.

The Panama sole was designed in 1944 and worked well in the jungles of Panama, but it did not become an official standard sole. The special soles of the Panamanian soles make it difficult for the wet mud to remain, which is good for walking in muddy areas. The concave shading of its heel part actually divides the heel into several parts, these parts work together, the firmness that lets heel tread the ground is strengthened greatly. The jungle boot was officially finalized in 1968 and remained in use until the end of the Vietnam war.

The evolution history of bush boots, from a side, reflects the importance that the us army attaches to the problem of soldiers' feet, and also lets us see the design concept that the logistics equipment of the us army is based on the actual needs of combat and the equipment is for human service. This concept is of great reference significance to the development of military equipment in the world.