- Military boots have always been needed and developed

What kind of boots do the us special forces have on active duty? In the base of the wear boots, the army may be Belleville, Wellco, Altama, seals or corps could be Belleville and Bates, most of the air force or Belleville and Wellco. If you're uncomfortable paying for Danner yourself, it's not without a complicated dress code. In operations, seals and the army are more likely to wear merlot and Asolo fn95 low-top shoes, Marine FR wear more merlot, and boots are not out of the question depending on the needs of the operation, most of which are Danner or Oakley. 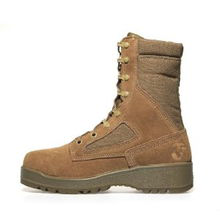 Belleville, one of America's oldest shoe manufacturers, was founded in 1904 and received its first military order in 1917.By world war ii, it was the largest supplier of boots to the U.S. military. In modern times, Belleville is as popular as the Zippo on a soldier's waist. Especially during operation enduring freedom, the boots have become something of a human pair. However, Belleville doesn't ignore the private market. They have specially designed trees for Oriental feet, which is the "market" brand that goes hand in hand with technology.

Danner is a veteran supplier of military boots that began in 1932.The power desert boot is a Danner product designed for soldiers fighting in complex terrain. The sole with coarse dry sense of feeling and Danner unique transmission technology, plus the comfortable adjustment lining that can restrain hot, make the person that wear has special feeling thereby. Rough textured leather and 1, 000 Daniel nylon, the uppers are strong enough for desert warfare. According to the seller, the shoes are standard equipment for desert storm, the Marine corps, us special police and border patrol.

U.S. army boots are a large number of equipment early American army troops, but the soldiers don't like it very much. First of all skin material bad ventilation, drainage performance is not good, and heavy weight, wear it in a tropical jungle warfare is indeed a very depressing thing. Moreover, it is the sole made simple non-slip handle, only when it is difficult to meet the Vietnam rainy season wet muddy environment.

Only the air force and helicopter pilots were willing to wear them, not because they feared the nylon boots would quickly melt and stick to their feet if they caught fire.

The main improvement of the leather boots in the later period is the non-slip design of the sole, but this sole is different from the panama sole. It's true that all-leather combat boots are rarely worn by ground combat troops and are mostly worn by pilots.

The earliest jungle boots is about 52 years beginning armed forces, but the quantity is not big. Its material is leather and canvas. Looks like a world war ii-era M43 combat boots. These boots during the Vietnam war, mainly Vietnam early those wearing military advisers, later after the surge is not met.

The first bush boot, much like the one currently in service, had the distinctive characteristics of the Vietnam-era bush boot: black leather and green canvas. From the heel up to the top there is a black leather reinforcement. There are no ankle straps. There are two drainage holes on the side to enhance air permeability and drainage performance. It runs on a Vibram sole, but it lacks a puncture - resistant steel sole.

The second bush boot is different from the first in that it removes the top edge and the back of the heel. There are still no straps around the ankles and no steel plate in the soles to protect the soles of the feet.

Third paragraph jungle boots, jungle combat boots and the biggest difference between the two is the ankle part is that it has a reinforcing tape, sole began to mount plate, estimation is afraid of being poked by Vietnam guerrillas bamboo stick. From the point of the collector shoes in hand, the boot of the year from December 66 to March 68. The boot is the earliest when equipped with Vibram sole, then introduced with panama soles models.

It had Panamanian soles, which were designed to prevent mud from sticking to the soles, and it became the Vietnam bush boot, which is still in use today.