The American desert combat boots came to prominence in the middle of the gulf war. At the beginning of the gulf war, American ground troops wore black boots with holes in them. When operating in the desert, it is simply too heavy, poorly camouflaged, and poorly insulated. For us, the quality of the boots is not only related to the soldier's health, more influence to the army's combat effectiveness under the strong demand of the military will company with a history of 50 years boots and the other five companies began to quickly design a suitable for desert combat boots, and shortly after the Thanksgiving Day in 1991 produced satisfactory samples of desert boots.

Compared with the full-leather boots, the desert boots do have some advantages: they are made of sand brown leather and Corduola material, which are much lighter than the half-leather bush boots before them. The soles are panama soles molded from synthetic rubber. The lining is made of CoolMax material, with good heat dissipation and air permeability. Insulated leather soles and removable activated charcoal insoles make the user more comfortable. The drain was cancelled.

In addition, the sole of the boot was designed without the puncture screen, and a honeycomb aluminum protective layer was added to reduce the degree of mine damage to the foot. Generally speaking, desert combat boots are light, stable, good air permeability, and can prevent sand grain drilling, do not need to wipe oil, have a certain lightning protection ability.

The Panamanian combat boot and the desert boot are both important. But panama is mainly not wear-resistant, and the sole is not cushioning. As for the V bottom GTX waterproof performance and all-weather ability is very good, but there are two problems. The other is that GTX's own characteristics cause the temperature to exceed 26 ° c, and without particularly high dry/wet difference air permeability, it will be very uncomfortable. The birth of desert boots and good performance is just to supplement these shortcomings.

Today, everyone knows Clarks as the king of desert boots, and HORWEEN may be an unfamiliar name, but it's impossible to use HORWEEN ingredients without having heard of luxury brand Prada, extreme Japanese artisan Visvim and Red Wing. 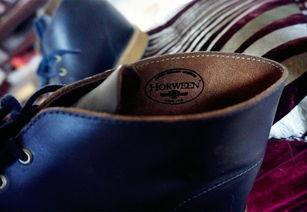 And HORWEEN can get the favour of so many big, because HORWEEN leather quality have a kind of frenzied paranoid, now the factory boss Nick Horween also complained about HORWEEN standard materials now less and less, be compelled helpless, HORWEEN can only a little bit to cut production, because even if Nick will use less perfect leather raw materials, the 135 craftsmen in the factory will not promise.

This obsession makes the production of HORWEEN extremely complicated: each piece of leather is made entirely by 135 craftsmen, and even one piece of HORWEEN goes through 89 separate processes that can take more than a month, all by hand, without any modern machinery.

Created with the same period HORWEEN leather factory has more than 200, but only a HORWEEN live now, HORWEEN survival is quite a philosophy of "the tortoise and the hare", in other leather factory with "novelty" year dozens of new product development, HORWEEN still "stall speed", adhere to the development of a new product cycle is at least more than 10 years, not the scientist in the laboratory and R&D staff, but real daily contact with leather craftsmen.

For more than a century, HORWEEN has insisted on making every piece of leather by hand. Its state-of-the-art facilities, like an old-fashioned conveyor belt, combined with a dwindling supply of raw materials, make HORWEEN a tiny product, mostly used in gadgets like wallets.